Ammonium (NH4+) oxidation coupled to iron reduction in the absence of oxygen and nitrate/nitrite (NO3–/NO2–) was first noted in a forested riparian wetland in New Jersey and was coined Feammox. Feammox is a process that can be described as the oxidation of NH4+ under iron reducing conditions, with iron oxides [Ferric iron, Fe(III)] as the electron acceptor. In this reaction Fe(III) is reduced to ferrous iron Fe(II), while NH4+ is transformed to NO2–, nitrogen gas (N2), or other nitrogen forms. We have first identified and recently isolated the pure Acidimicrobium sp. Strain A6 that is responsible for this Feammox process. Feammox is an important process for nitrogen loss in iron rich, acidic soil environments under oxygen-limited conditions. Our results from operating a membrane reactor with a high Acidimicrobium sp. Strain A6content (~ 50%) indicated that it might be possible to develop a novel anaerobic NH4+removal technology from wastewater based on the Feammox process, which might be more robust at low temperatures than Anammox-based processes.  For this purpose, we have shown that Acidimicrobium sp. Strain A6 is electrogenic and can grow in microbial electrolysis cells where it transfers the electron to the anode instead of to ferric iron.   We are currently studying the development of bioelectrochemical reactors for the purpose of anaerobic ammonium oxidation.

The enzyme responsible for the Feammox process has been identified and is related (~ 90% similarity) to methane monooxygenase. We are currently collaborating with enzymologists to better understand and characterize this oxygenase.

We have just completed a study focusing on the activity of Acidimicrobium sp. Strain A6 in the Pearl River Estuary (South China) and the Neuse River (NC).  Both systems have been affected by hurricanes/tropical cyclones, which did influence the Fe(III) loading to sediments and hence the Feammox process.  Separate incubations have shown that the Feammox process plays a major role in ammonium oxidation in Neuse River sediments.

Biological Defluorination of Per- and Polyfluorinated Alkyl Substances (PFAS)

The genome of Acidimicrobium sp. Strain A6 has been sequenced and contains genes for reductive dehalogenases (RDases).  Upon further investigation we have shown that Acidimicrobium sp. Strain A6 is capable of degrading perfluorooctanoic acid (PFOA) and perfluorooctane sulfonate (PFOS), both of major environmental concern due to their wide environmental prevalence as well as health effects.  We further showed that during the degradation of these PFAS, the gene for a novel reductive dehalogenase is expressed.

Our laboratory is currently having a major effort towards gaining insights and developing application for this novel pathway of biological defluorination of PFAS, specially perfluorinated alkyl acids (PFAAs).  Specifically, we are focusing on:

Understanding and describing the defluorination kinetics in pure PFAS solutions vs. mixtures of multiple PFAS.

Develop methods to deliver ferric iron to the subsurface to stimulate ethe activity of Acidimicrobium sp. Strain A6 for the purpose of PFAS defluorination in bioremediation schemes.

Study the bioaugmentation of PFAS contaminated biosolids with Acidimicrobium sp. Strain A6 with the goal of treating these solids from waste treatment plants.

We are conducting experiments and having various collaborations to gain insights into the functioning of the reductive dehalogenases responsible for the defluorination process.

Study the potential defluorination of PFAS in natural sediments where the presence of Acidimicrobium sp. Strain A6 has been detected, such as the Neuse River in NC.

Conduct experiments to study the fate and transport of PFAS in wetland mesocosms that favor the growth of Acidimicrobium sp. Strain A6 (iron rich, acidic).

Focus on the differences and possible competitive effects of defluorination and dechlorination by Acidimicrobium sp. Strain A6.  Here we are studying the degradation of 1,2,3, TCP and PFOA either individually or in mixtures and focusing on the kinetics as well as tracking which dehalogenase genes are expressed in each case.

Funding for these efforts is provided by NSF, SERDP, NIH, private industry, and foundations (Moore Foundation). 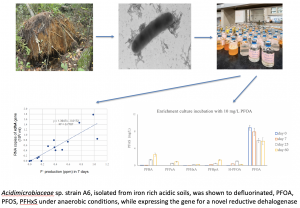 Biological Reduction of Selenium during the Feammox Process

Reduction of heavy metals in wastewater through biological processes using the recently discovered feammox method is a novel area of pollutant mitigation research. The feammox process, conducted by Acidimicrobiaceae bacterium A6 (ATCC, PTA-122488, hereon referred to as A6), has been shown to reduce heavy metals such as Uranium(VI) and Copper(II) simultaneously with coupled iron reduction and ammonium oxidation in the absence of oxygen. This process thus suggests a novel environment in which to biologically remediate other metal contaminants. As industrial wastewater is high in both ammonium and heavy metals, this environment is predicted to be ideal for the application of the feammox process.

Selenium is a common heavy metal pollutant in industrial wastewater, particularly from power plants, metal mining and smelting practices, landfills, oil refinery and agricultural irrigation. The primary forms in wastewater are selenite and selenate, and both are highly mobile. We are investigating the use of A6 to reduce selenium for potential use in industrial treatment processes.

Different forms of reactive N are responsible for environmental quality problems such as eutrophication (e.g. NH4+, NO2– and NO3–) or green house effect (e.g. nitrous oxide, N2O). In fact, N2O has greenhouse effect 300 times more potent than carbon dioxide. This brings the need to fully denitrify N gases to its non-reactive form. Biological denitrification is the sequential reduction of NO3– or NO2– to nitric oxide (NO), nitrous oxide (N2O) and finally N2. These reduction steps are catalyzed in sequence by four types of nitrogen reductases: Nar, Nir, Nor and Nos. With this information, a study of the bacterial population composition and its changes over time due to changes in their environment can be detected. With a better understanding of the microbial population activity and composition, we can optimize the engineered system to maintain a healthy population of denitrifiers to achieve the objective of fully reducing reactive N.

Impacts of stormwater green infrastructure on hydrology and nutrient fluxes

Stormwater green infrastructure (SGI), including rain gardens, detention ponds, constructed wetlands, bioswales, green roofs, and tree plantings, is being implemented in cities across the globe to help reduce flooding, decrease combined sewer overflows, and lessen pollutants being transported to urban streams and rivers. Despite the increasing use of urban SGI, little is known about the cumulative effects of multiple SGI projects on hydrologic and water quality at the watershed scale. In recent years we have conducted detailed nutrient balances on urban detention ponds as well as study the effect of green infrastructure on urban watersheds.

Biological Removal of Contaminants from Water and Gas Streams

Over 95% of the nitric oxides (NOx) compounds emitted from off-gas in coal-fired power plants are in the form of nitric oxide (NO). Treatment of NO through conventional biological processes (e.g. biofilters and trickling filters) typically requires long contact time due to the low solubility of NO in aqueous systems.

Here we tested the efficiency of hollow fiber membranes bioreactors to solubilize NO from a gas stream into a liquid phase where it was then denitrified.  Different NO flow rates, effects of alternative dosage of NO3–, impacts of liquid flow rates and kinetics of the bioprocess were also examined and the microbial characterization for each operating condition was determined.

Here we are investigating the effect of phosphate (PO43-), sulfate (SO42-) and iron (Fe(III)) reduction on As dynamics and its bioaccumulation in wetlands using greenhouse mesocosms. Results indicate that high Fe (50µM ferrihydrite/g solid medium) and SO42- (5mM) treatments are most favorable for As sequestration in the solid medium in the presence of wetland plants (Scirpus actus), because root exudates facilitate the microbial reduction of Fe(III), SO42-, and As(V) to sequester As(III) by incorporation into iron sulfides and/or plant uptake. Whereas, in the Fe(III)-rich solid medium with plants, high PO43- (100 µM) loading strongly enhanced As release into pore water under anoxic conditions, possibly due to the competitive sorption between PO43- and As(V) as well as the reductive dissolution of Fe(III) and As(V).

Both constructed and natural wetlands can be used to reduce contaminant concentrations in water. We have studied two tidal marshes in the New Jersey Meadowlands to compare their ability to remove a variety of trace metal contaminants (Cd, Cr, Cu, Mn, Pb, and Zn) from water.

Recent analysis of sediment cores and surface and pore-water samples indicates that Cr, Mn, and Pb are largely immobilized by precipitation with sulfides. Measurements reveal no net trace metal accumulation in the sediments, indicating a dynamic equilibrium of trace metal flux into and out of the sediments. Different flooding scenarios (sustained and intermittent) did not result in differences in the metal immobilization potential of the constructed marsh. The newly constructed wetland immobilized significantly more Cr, Mn, and Zn than the natural marsh and similar concentrations of Cd, Cu, and Pb, possibly due to increased redox buffering through a larger FeS pool buffering against tidally induced oxygen delivery.

Uranium contamination in soil and groundwater is a serious problem due to this heavy metal’s biological toxicity. In-situ microbial reduction of water-soluble uranium(VI) to insoluble uranium(IV) has shown to be a promising remediation technique.

We have conducted laboratory and greenhouse experiments focusing on the dynamics of uranium in wetland systems, studying uranium speciation as well as the iron and microbial dynamics amongst roots. Since wetland sediments cycle iron and plants provide a carbon source via root exudates and plant turnover, wetland sediments seem ideal environments for biological uranium immobilization by iron-reducing bacteria. Furthermore, since droughts and seasonal water level changes might re-mobilize previously bio-immobilized uranium by exposure to oxygen, we have studied the effect of periodic water level fluctuations on the stability of reduced uranium.

Wetlands are important ecological tools for water quality protection, and soil-atmosphere exchanges of carbon and nitrogen gases are key components of wetland nutrient budgets. A detailed description of the physical-chemical processes governing the dynamics of dissolved gases in wetland pore waters is essential for linking biochemical production and/or consumption. with eventual migration to the surface, yet these transport processes are poorly represented in biogeochemical models.

In this research, we use gas tracer measurements in well-controlled laboratory experiments and natural wetland environments to quantify the kinetics of root-mediated gas exchange between pore water and the roots of wetland plants, which is a critical gas transport pathway in saturated soils. An important research initiative has been to combine dissolved gas tracers with push-pull measurements and simple analytical models to infer the root-mediated gas exchange kinetics in situ and examine spatial and temporal variability in gas exchange rates.