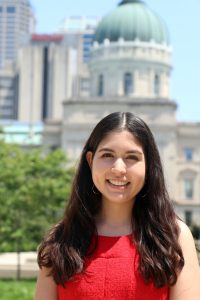 Camila Llerena-Olivera is a Ph.D. student in the Civil and Environmental Engineering department at Princeton University. She received her B.S. and M.S. degrees in Environmental and Ecological Engineering from Purdue University. During her time at Purdue, she pursued multiple research projects varying from international development to industrial ecology.  She became interested in PFAS remediation after completing an internship with the Indiana Department of Environmental Quality. Her current research focuses on microbial electrolysis reactors that use A6 as a bacteria medium.

Jinhee Park is a Ph.D. student in the Department of Civil and Environmental Engineering at Princeton University. She holds a B.S. from Ewha Womans University and an M.S. from Seoul National University.  Previous research includes stabilization and reduction in the bioaccessibility of As-contaminated soil through in situ co-precipitation of amorphous iron oxides.  She is currently interested in a surface modification of iron oxides to improve the Feammox process for field applications of PFAS treatment in groundwater.

Joel William Strothers joined the group in July 2020. He is a Ph.D. student in the Department of Civil and Environmental Engineering at Princeton University. He earned a B.S. from CUNY Medgar Evers College in Environmental Science and a minor in Mathematics. During his full-time undergraduate studies, Joel worked as a part-time Chemistry Laboratory Technician Adjunct while also serving as a Senior Undergraduate Researcher. Joel focused on advanced biofuel research where he analyzed the mechanisms of green fuel in order to identify cleaner fuel with less undesirable by-products. Over the course of his undergraduate career, Joel’s participation and contributions to his laboratory research team led to seven scientific publications. In addition to in-house research, Joel also participated in both domestic and international internships, including internships at NASA Goddard Space Flight Center, NOAA Crest, REU University of Maine, Monserrat, Malaysia, American Green Fuels, Rutgers University, and Meadowlands Environmental Research Institute (MERI). In his spare time, Joel enjoys mentoring, volunteering tutoring services, and being an advocate in public health initiatives. He volunteered in both Ghana and Panama where he erected mobile healthcare stations for underserved communities. In recognition of his civic contributions, Joel received two award citations from the Brooklyn Borough President and Brooklyn Senator for Outstanding Service for Community Enrichment.

Matthew Sima is a Ph.D. student in the Civil and Environmental Engineering department at Princeton University. He received his B.S. and B.A. degrees in Biology and Environmental Sciences at Duke University. At Duke, Matthew studied plant phenology and microbiology in the Liu Lab and led several research projects including environmental justice and racial disparity in gardening, sustainable alternatives to pangolin scales in Chinese medicine, and the effect of PFAS pollution in the Haw River on the surrounding communities. This final research project introduced Matthew to the intricacies of PFAS pollution and the need for a better understanding of PFAS degradation as a process. Matthew’s current research topic focuses on the kinetics behind the coupling of the A6 mediated Feammox reaction with PFAS degradation. He is currently working with small-scale lab incubations and plans on scaling up his research to simulate wetland ecosystems.

Chiara Smorada is a Ph.D. student in the Civil and Environmental Engineering department at Princeton University. She received a Chemistry B.S. from Saint Mary’s College, IN, and an environmental engineering B.S. from the University of Notre Dame. Some of her previous research experiences include the development of a paper analytical device for rapid screening of low-quality pharmaceuticals and carbamate pesticides, analysis of microplastics, and investigation of peracetic acid for wastewater treatment. She is interested in PFAS remediation as a way to combine her enthusiasm for chemical analysis and environmental stewardship.